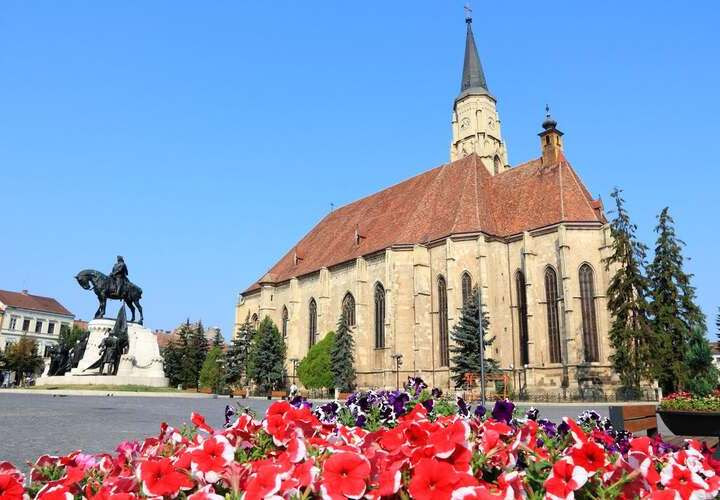 Cluj's Union Square is one of the most important symbols of the city in the heart of Transylvania. With the Church of St. Michael and the Matia Corvin statue group in the middle of it, Cluj's Union Square is an impressive tourist attraction, a central point of attraction and a meeting place for locals and tourists alike. Here, you are at ground zero of Cluj-Napoca.

Historically speaking, the Big Square, as it was called until the middle of the 19th century, is the second square of Cluj, having been formed after the current Museum Square (the Small Square in the Old Citadel). Towards the end of the 19th century it became the Main Square, being transformed into an ornamental square. The name did not last very long, and in the first part of the 20th century the square was called King Matthias Square. It was not until 1918, following the historical events of that year, that it became Union Square. However, during the communist period, the name was changed to Freedom Square, and nowadays it is back to the old name: Union Square.

In addition to the Church of St Michael and the statue of Matthias Corvinus, there are many famous buildings around the square. The Bánffy Palace, which houses the Art Museum, and the two mirror-built buildings opening onto Iuliu Maniu Street, are on the eastern side of the Square. On the south side are the former Cluj City Hall and the National Bank building. The Continental Hotel, one of the most beautiful buildings in Cluj, built since 1894, is located on the south-west corner of Unirii Square.

At the same time, in the centre of the Square, are the Roman remains of the ancient city of Napoca!

Once, the impressive church building was surrounded by a stone wall to which merchants' kiosks and stalls were attached. Inside the wall, next to the church, there was a cemetery. Outside the church wall, there was even a storey building that functioned as a school. With the installation of the Matia Corvin statue group in 1902, the square began to be landscaped with flower beds and small ornamental areas.

Nowadays, Cluj's Union Square is the centre of the city, where some of Cluj's most representative events take place.